Last week’s announcement by the Securities and Exchange Commission (SEC) of the resolution of its outstanding Foreign Corrupt Practices Act (FCPA) enforcement action with Halliburton Company continues to resonate and provide lessons for the compliance practitioner. [Full disclosure – I am a Halliburton shareholder] I wanted to continue to explore the enforcement action around the issue of internal controls, their effectiveness (or lack thereof) and management over-ride of internal controls.

In a Cease and Desist Order which also covered former employee Jeannot Lorenz, the SEC spelled out a bribery scheme facilitated by both a failure and over-ride of company internal controls. The matter involved Halliburton’s work in Angola with the national oil company Sonangol, which had a local content requirement. The nefarious acts giving rise to the FCPA violation involved a third-party agent for Halliburton’s contracts with the state-owned enterprise.

According the SEC Press Release, this matter initially began in 2008 when officials at Sonangol, Angola’s state oil company, informed Halliburton management it had to partner with more local Angolan-owned businesses to satisfy local content regulations. The company was successful in meeting the requirement for the 2008 contracting period.

However, when a new round of oil company projects came up for bid in 2009, Sonangol indicated, “Halliburton needed to partner with more local Angolan-owned businesses in order to satisfy content requirements.” The prior work Halliburton had on local content was deemed insufficient and “Sonangol remained extremely dissatisfied” with the company’s efforts. Sonangol backed up this dissatisfaction with a potential threat to veto further work by Halliburton for Sonangol. It was under this backdrop that the local business team moved forward with a lengthy effort to retain a local Angolan company (Angolan agent) owned by a former Halliburton employee who was a friend and neighbor of the Sonangol official who would ultimately approve the award of the business to Halliburton.

In each of these attempts, the company bumped up against its own internal controls around third parties, both on the sales side and through the supply chain. The first attempt to hire the Angolan agent was as a third-party sales agent, which under Halliburton parlance is called a “commercial agent”. In this initial attempt, the internal control held as the business folks abandoned their efforts to contract with the Angolan agent.

The first attempt to hire the Angolan agent was rejected because the local Business Development (BD) team wanted to pay a percentage fee based, in part, upon work previously secured under the 2008 contract and not new work going forward. Additional fees would be paid on new business secured under the 2009 contract. This payment scheme for the Angolan agent was rejected as the company generally paid commercial agents for work they helped obtain and not work secured in the past. Further, the company was not seeking to increase its commercial agents during this time frame (Halliburton had entered into a Deferred Prosecution Agreement (DPA) for FCPA violations in December 2008 for the actions of its subsidiary KBR in Nigeria).

Finally, “As outlined by Halliburton’s legal department, to retain the local Angolan company as a commercial agent, it would be required to undergo a lengthy due diligence and review process that included retaining outside U.S. legal counsel experienced in FCPA compliance to conduct interviews. Halliburton’s in-house counsel noted that “[t]his is undoubtedly a tortuous, painful administrative process, but given our company’s recent US Department of Justice/SEC settlement, the board of directors has mandated this high level of review.”” In other words, the internal controls held and were not circumvented or over-ridden.

Companies are required to maintain and assess the effectiveness of Internal Controls over Financial Reporting (ICFR).

Teledoc, Inc., an emerging growth company, disclosed a material weakness in their ICFR in the risk factors section, but was not required to issue either a Management or Auditor’s Report on Internal Control Over Financial Reporting.

In connection with our December 31, 2015 and 2014 audits, we identified a material weakness in our internal control over financial reporting. A material weakness is defined as a deficiency, or a combination of deficiencies, in internal control over financial reporting, such that there is a reasonable possibility that a material misstatement of our annual or interim financial statements will not be prevented or detected on a timely basis.

How often does your organization complete a detailed Every organization develops internal controls to achieve the following objectives:

These controls should be re-evaluated on a routine basis to ensure that they are operating properly and still meet their objectives. When designing internal control policies, there are some common risks that every organization should consider, including:

Internal controls serve as the first line of defense in preventing fraud and ensuring the viability of your organization. Even organizations with existing controls in place need to reevaluate them from time to time to ensure the objectives are still being met and identify any areas of weakness or new risks.  Consider the internal controls risks outlined above when evaluating your organization’s existing internal controls. It’s important to be proactive in assessing what risks need to be addressed, designing the controls necessary to mitigate those risks, and implementing those controls successfully. 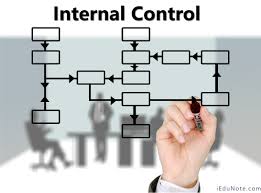 Enterprise Risk Management — Integrated Framework : Any one of a variety